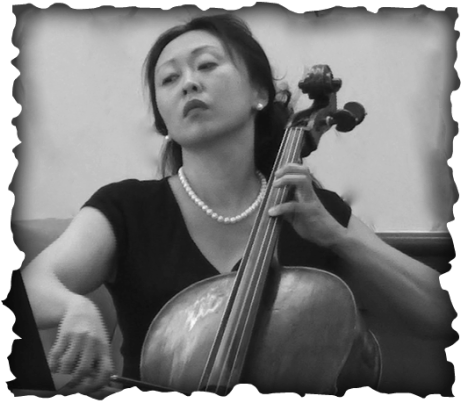 A dynamic and versatile artist, cellist Chungsun Kim has been widely recognized for performances in major music capitals in North and South America, Europe, and Asia. Her expressive playing and extraordinary musicianship has led her to perform at many different concerts and venues in the United States and abroad, including Alice Tully Hall, Sejong Concert Recital Hall (Korea), Araki Concert Hall (Japan), Weill Recital Hall at Carnegie Hall, Merkin Concert Hall, and Avery Fischer Hall at Lincoln Center. She has appeared as a soloist with Pro-Arte Chamber Orchestra, Philharmonia Virtuosi, Sarah Lawrence Symphony Orchestra, National Repertoire Orchestra, Philharmonia Lawrencia, New York Virtouosi, Ars Ensemble, and Aspen Summer Music Festival Orchestra. She was also featured as a guest artist at music festivals such as Arcady Music Festival, InterHarmony International Music Festival (Italy), New International Music Festival (Korea), Laurentian Summer Music Festival, Schleswig-Holstein Music Festival (Germany), Beethoven Festival, Summit Music Festival, and The Academy of Music Festival. She performed with the Little Orchestra Society at Lincoln Center in the part of "Vivaldi’s Venice.” Ms. Kim premiered a composition in 2005, "Cello Rhapsody" by Craig Morris in NY. Her engagement as a faculty and recitalist at the New International Music Festival in 2000 subsequently led to her duo recital with Kazuko Hayami under the sponsorship of Araki Industry Corporation in Japan. Her recent performance of Karl Jenkins’ "The Armed Man" Benedictus at David Geffen Hall at Lincoln Center was one of the highlights of her recent performances. She is scheduled to release her CD under the Hartshorn Classical in 2018.

As an active chamber musician, Ms. Kim is a founding member of Amasi Trio, the Trio in Residence of Nyack College School of Music for the past twenty years. The trio, whose name stands for American-Asian, is committed to perform music by Asian composers as well as traditional music. In the fall of 2013, the trio released a CD with Parker, Rachmaninoff, and Chaminade Trios in the repertoire. She is also a member of Trio di Buson, and the group released its first CD under the Guild label in 2014. Since 2012, the Trio di Buson has been under the management of Patricia Alberti Performing Artists Management. She joined the Orion Music Ensemble in 2011 and had been involved with the Balcony Chamber Music Series in the Metropolitan Museum of Art in NY.  As an orchestra player, she was a member of Brooklyn Philharmonic, Westchester Philharmonic, New York Virtuosi, Philharmonia Virtuosi of New York, and soloist and principal of New York Pro Arte Chamber Orchestra. and ha